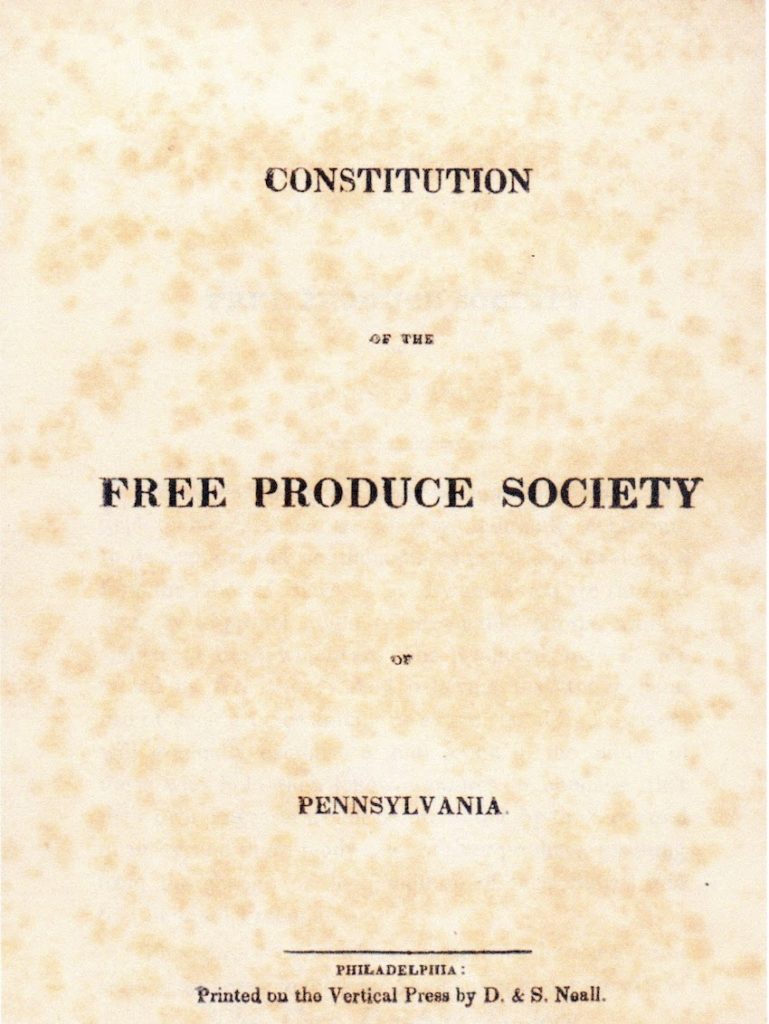 According to Quakers in the World, “The “free produce” movement was a boycott of any goods produced with slave labour. It was seen as a way of fighting slavery by having consumers buy only produce from non-slave labour. The movement was active in North America from the beginning of the abolitionist movement of the 1790s to the end of slavery in the 1860s. In 1826 in Baltimore, Maryland, Benjamin Lundy opened the first “free produce” store that only sold goods that had been produced by non-slave labour. In the same year Quakers in Wilmington, Delaware, drew up a charter for a formal free-produce organisation. In 1827 the movement expanded and Thomas M’Clintock and others founded the Free Produce Society in Philadelphia, Pennsylvania.

In 1838 several such groups came together to form the American Free Produce Society, which developed the idea further as it aimed beyond boycotts and early forms of conscious consumerism, by creating several pamphlets, tracts and the journal Non-Slaveholder. The association, although larger than the predecessors, did not grow large enough to start benefiting from economies of scale and as a result the prices were always unsustainably higher than the slave produced goods they were trying to replace.

Cincinnati 1847, Levi Coffin established a warehouse selling goods not produced by slave labour. For a time the business prospered but was eventually forced to close. It was difficult for abolitionists to ascertain which goods were wholly produced by free labour. The American Free Produce Society disbanded in 1847 as there was insufficient support of the boycott. In the previous year Quakers had founded The Philadelphia Free Produce Association of Friends. Quakers who had organised the earlier Free Produce Society continued their activities until 1856.”

Our “One Nation, Under Local” t-shirt represents that hard-fought-for line of anti-slave labor as well as being made local. We talk about these things all the time.

We ask you now, has there ever been a time when you needed local more? From being a good “Local” to shopping local, from supporting local farmers to having good neighbors, local heroes and friends to support you.
We’ve always been there to herald the story and importance of everything local since around 1978. This time, we’re asking you to help us, TS Designs, your favorite local, U.S. made t-shirt company.
And at this time, local isn’t just your town, it’s the entire U.S., it’s all of us pulling together to keep a nation safe and taken care of. This is new territory but one thing that we can see clearly now, is that moving forward, “local” on a national level will be more important than ever to help us stay strong and to rebuild.
Please support us by buying our “One Nation, Under Local” t-shirt, or helping keep our lights on with a standalone donation.
Thank you so much in advance for your support.

Read the full article here on Quakers in the World.