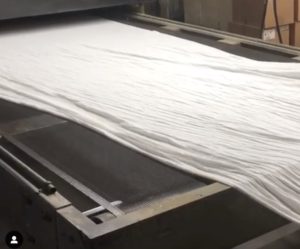 Passage of the new Farm Bill in 2019 put hemp front and center again, and TS Designs is following developments closely, even putting together a hemp vision of our own. In this article by Sourcing Journal, president and CEO Eric Henry also contributes to the conversation.

“Industrial hemp is in the spotlight again, and for good reason. The new Farm Bill that the U.S. Senate passed 87-13 in December now legalizes the commercial production of hemp, freeing it from the grips of the Controlled Substance Act and severely curtailing the number of restrictions that have prevented farmers from raising it as a commodity crop like any other.

But it’s not all open skies for hemp. Individual states still have the final word regarding regulation, especially now that cannabidiol, the non-psychotropic component of cannabis better known as CBD, is rearing its head in everything from gummies to dog treats.

‘Even if the government comes up with a regulatory framework, states have to adopt it,’ said Mike Lewis, director of Thirds Wave Farms in Kentucky and one of the first private citizens to legally farm hemp—through a partnership with Patagonia in 2016—since its prohibition in the 1970s. ‘We have a long ways to go and a lot of legislating that needs to be drafted. But we’re heading in the right direction. I think it’ll be two or three years before it’s extremely common.’”

Read the full article on hemp in the Sourcing Journal.

We send out a monthly newsletter. Stay up to date with developments at TS Designs and our journey towards sustainability!