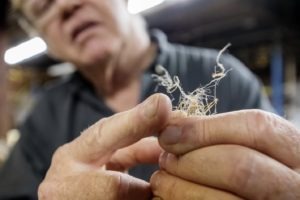 “In the basement of a dye facility on Tucker Street, a group of men are testing the fiber of the past to build a better future.

Nicknamed “cotton’s best friend,” hemp fiber can be blended with cotton to create softer, stronger clothing with both economic and environmental benefits.

So why isn’t it widely available?

Growing industrial hemp has been legal in North Carolina for roughly two years, but it didn’t become legal at the federal level until Dec. 20, when President Trump signed an act removing it from the list of controlled substances.

It’s been on the list since 1970, lumped in with its infamous cousin: marijuana.

But many petitioned for its removal, arguing that hemp contains less than 1 percent of retrahydrocannabinol — the substance in cannabis plants that gets users high — while marijuana contains 10 to 40 percent.

Read the full article on industrial hemp fiber at the Burlington Times-News.